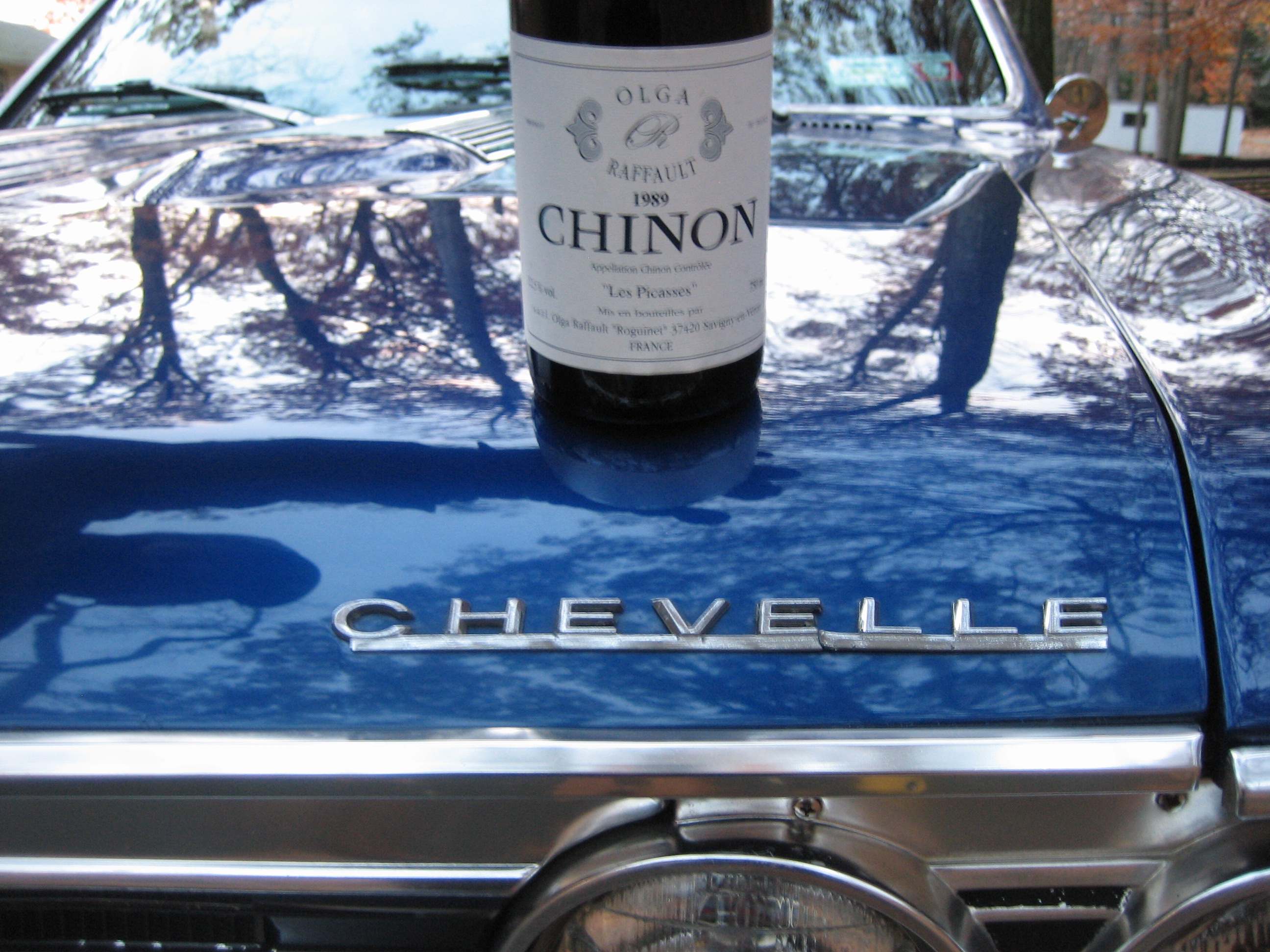 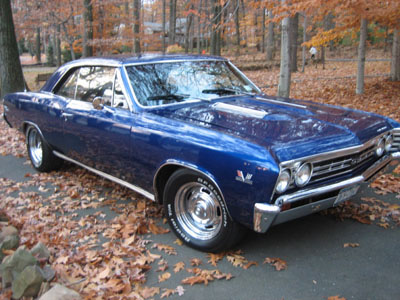 After teaching Chinon as part of my “Looks Like Red, Acts Like White” seminars at the Aspen Food & Wine Classic in June, this Loire Valley red has become a new passion for me.  Its medium weight and zesty berry taste makes it blissfully versatile with food, a fine bedfellow for both lighter and richer dishes.  Comprised of the Cabernet Franc grape, Chinon’s subtle “green” flavor – often manifesting itself as green olives, green pepper, or even pine needles — gives it a uniquely punchy personality that can be invigorating during interminable, sleep-inducing dinners.

It is no surprise, then, that I resolved to take Chinon to my relatives’ home for the mother of marathon meals, Thanksgiving.

French wine on the most American of holidays?!  Homeland Security could cart me away for such an unpatriotic transgression.

So to balance things out, I was left with no choice but to borrow a ’67 Chevy Chevelle SS muscle car from the good folks at the Classic Car Club of Manhattan.  At least my ride would be unambiguously American.

On Thanksgiving Day, I loaded my wine bag with Chinon and the other treats listed below – and jumped into this brilliant blue thunder-chariot.  There’s no better way to feel like a Duke of Hazzard than to ride the rumble of 350 horses, emanating from an overpowered 396 “Big Block” V8 engine, a symbol of the halcyon, if smoggier, time before oil crises and politically correct Prisuses.  Like a growling volcano, this beautiful barbarian felt like it could blow at any time, which must be why it came equipped with a fire extinguisher near the gear stick.  We set off more than a few car alarms roaring out of the city.

My family was pleased with both my transportation and the wine, even if the former made the latter arrive a bit shaken and stirred.  It was the kind of cross-cultural match that France’s new president, Nicolas Sarkozy, would surely admire: French wine, American thunder.

Domaine du Colombier Chinon Cuvee Vielles Vignes 2004(France, $17)
A medium-weight charmer that shows essences of dried currants and spice, with a hint of martini olives on the palate.

Olga Raffault Chinon Les Picasses 1989 (France, $44)
The rare older Chinon in stores now, it offers a pretty perfume of cranberries and plums, joined by notes of cedar on a smooth, enduring finish.

Villa Sparina Monferrato White Montej 2004 (Italy, $13)
From Italy’s Piedmont region, this fascinating blend of Chardonnay, Muller-Thurgau, and Sauvignon Blanc displays considerable complexity for the price, with a swirl of grapefruit, pineapple, and almonds that stays refreshing to the end.

EOS Estate Vineyards Petite Sirah 2004 (California, $18)
A complex mix of wild berry and cassis greets the nose, with hints of mocha and sweet spice, which becomes a rich (but not heavy), spicy, highly-likable sip on the palette.  A good example of a less familiar varietal (Petite Sirah) prospering in a rising-star region (Paso Robles). 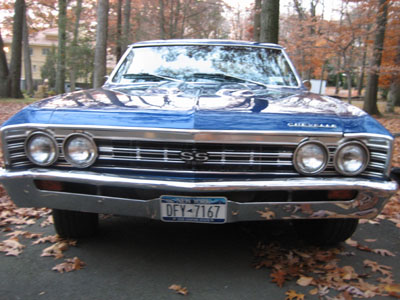 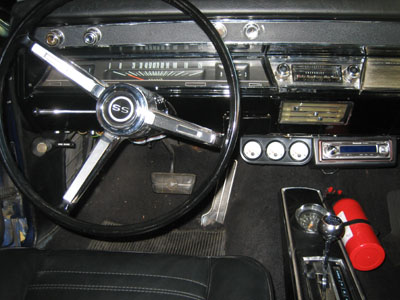 Before I get to this entry’s featured wine, I ask you to indulge a digression into an indignity that happened on a recent wine-tasting trip to Paris, France. 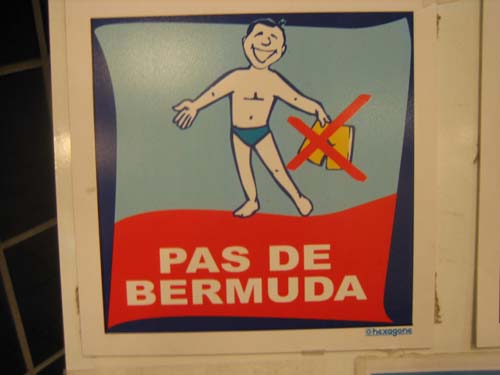 Being an avid swimmer, I sought out a decent pool in Paris, and all suggestions pointed to the enormous Piscine Suzanne Berlioux at the underground Les Halles shopping mall in Paris’ 1st arrondissement.  So I grabbed my goggles and hopped the Metro to Les Halles.  Entering the lobby, I encountered a curious placard: “Pas de Bermuda”.  That’s odd, I mused, but if this means what I think it means – pas de problème – I have in tow not knee-length Bermuda shorts but just a standard-issue boxy bathing suit – the kind adorning any guy around any pool in Normal, Illinois.

After a quick change in the locker room, I headed out to the pool area, set down my bag of gear, and prepared to dive in. Suddenly, from the shadows charged a pool employee with her face twisted in a pretzel of consternation, as if I were about to heave a boa constrictor into the pool.

“Really?” I asked, “In America, swimmers wear these,” pointing to my comfortably baggy suit.  She wasn’t buying it, waiving her finger at me in a French figure-eight of finality.

Defeated, I slinked back into the locker room and found the female attendant (yes, there are female attendants planted in the men’s locker room at the Les Halles pool, though their appearance were more lunch lady than Lindsey Lohan).  I scraped together a few bits of my shoddy Jersey-trained French to ask to buy an approved bathing suit.

This sent the attendant rummaging through a box of bathing suits in a nearby closet.  She fished out a black satiny swatch – a miserable sliver of cloth whose rightful place is parked on a Brazilian pinup or on Borat from Kazakhstan – not on a jetlagged wine writer just looking to swim laps.

“You can’t be serious!,” I protested, my guttural McEnroean scorn in full flower.  She shrugged, her face a scowl of intransigence, the man-thong hanging from her fingers like a gift from Euripides’ Medea.

Then the thought of trekking all the way to the pool for nothing – and the solace of knowing not a soul there – tempered my disgust.

“Okay, fine, give it to me.” I handed her four Euros and most of my self-respect.

The swim ended up being less horrible than I expected.  When every other guy is dressed in the manner of a marsupial – imagine the Mike Myers-parodied dancer in Madonna’s “Justify My Love” video – it’s easy to blend in.  And those Speedo-sporting Olympians may be on to something: there’s definitely less drag in the water.

However, the question remained: why on Earth is this Paris swimming pool enforcing a Speedos-only policy?

I pictured the mystery woman for which the pool is named, Suzanne Berlioux, as a militant feminist, sitting with her girl-power cronies in a smoky backroom. “Errr, I ’aave it,” she exults, her eyes beaming with anti-patriarchal righteousness. “If zee women must wear zee beekini, then zee men must too!”

I held fast to this silly theory until my friend’s Parisian girlfriend – a frequent swimmer herself – revealed the real reason. She said that the policy was borne not of misguided gender politics but of simple hygiene – to prevent French men from wearing their shorts all day and then swimming in them.

That’s a novel idea, I thought, but does it really work? “What’s to prevent these filthy boulevardiers from wearing their Speedos underneath their shorts all day and then swimming in them anyway?”

Her answer explained everything.

“Why ask all of these questions? We’re French.”

The French may have singular notions of swimming pool hygiene, but they know a little something about bringing back the fly in flying. Whereas you can’t even buy bubbly in economy class on most U.S. airlines, Air France dished it out gratis both ways between New York and Paris — and decent stuff to boot.

Not your usual monochromic, medicine-bottle coach-class quaff, the Jacquart Brut pushes all the right buttons with its bright, Granny Smith perfume and hints of toast and honey, culminating in a persistent finish that is both tangy and smooth