On Thursday I attended a six-course dinner with friends at Collichio & Sons, where both the cuisine and the wine were epic.  The latter was selected and handled by wine royalty, having come from the inventory of Crush Wine & Spirits co-owner Bobby Schagrin and decanted and presented by sommelier extraordinaire Robert Bohr.  Among the specimens were a Dom Perignon 2002, a Domaine Leflaive Chevalier-Montrachet 2000, a Mugnier Musigny 1996, a Bruno Giacosa Santo Stefano di Neive Riserva 1988 (in magnum), and a Chateau Palmer 1970.

Stunners every one, but the Palmer’s haunting plums-and-truffle perfume and enduringly silky, savory finish as well as its well-regarded vintage and striking black-and-gold label cried out for saving it as a souvenir.  (We grape nuts sometimes like to hold on to these so-called “dead soliders” like a moonstruck Iroquoi would collect scalps—part keepsake, part trophy, part talisman).  So at the end the of the evening, I walked over to the table that held the finished bottles and grabbed the Palmer, which was drained save for the half-inch of undrinkable sediment that naturally collects in the bottle after a mature wine like this is decanted.

As my friends and I headed across Tenth Avenue after leaving the restaurant, two NYPD officers spotted me toting the bottle and promptly waved me aside for questioning.  I explained that the bottle was only a souvenir and essentially empty, but the cops weren’t having it and rushed to write me an “open container” summons with a mandatory court appearance.

Now I imagine that the officers believed that they were just doing their job – and on the whole the NYPD does do a remarkable job – but come on, guys, you don’t need viticultural degree to know the difference between a hooligan brazenly brandishing Boone’s Farm and an empty bottle of fine wine being transported discreetly not for the purposes of urban mayhem but simply for the sake of nostalgia.  Okay, maybe I could see them busting me for walking with the sediment of Chateau Palmer from 1980 or 1992.  But a ’70 Palmer?  Now that’s a miscarriage of justice, I’m telling you; plain and simple, it’s a violation of our civil(ized) rights. 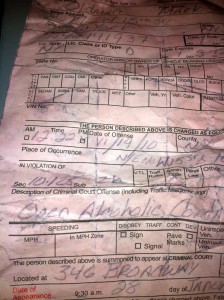