Are you just as excited as we are to see which films take home Oscar gold during tomororw’s Academy Awards? Maybe you’ve planned a party with friends to celebrate the cinematic evening? No matter your viewing preference, we’ve recruited wine expert Mark Oldman to share his 2013 Academy Awards Wine Guide. What does that mean? He compares each of his top picks for Best Picture to a certain wine and points you in the direction of a specific bottle.

So, whether you’re rooting for a certain film or just looking to set the stage for your get-together, sit back and enjoy Mark Oldman’s drinkable guide to the Oscars. And because who doesn’t enjoy a delicious appetizer alongside their red, white or bubbly — he shares an hors d’oeuvre secret that’s sure to impress any guest.

AFWF: You have an admitted interest in how wines have played a role in notable movies throughout history. With that in mind – and given the fact that it’s Oscar Week – how would you compare your favorite films nominated for Best Picture to certain wines?

This Affleckian flick deserves association with Champagne for its depiction of international intrigue leavened with displays of over-the-top, Hollywood-style glamour— a combination that Champagne and its attendant lifestyle have long manifested. Note that it is only when the characters have departed Iranian airspace – and the flight attendants then announce that alcohol consumption is no longer illegal – that they are truly safe andproceed to pop a celebratory bottle of Moët.

Like Quentin Tarantino’s latest, Australian Shiraz arrives on the scene with guns-a-blaze, exciting and extravagant in its richness and range of plum-and-mocha-inflected flavors.

Like this edgy-but-charming Bradley Cooper tour de force, good versions of Dolcetto (a tangy, medium-bodied red) can be a bit bitter upfront but ultimately finish with lip-smacking exuberance.

Beasts of the Southern Wild: Wine from Red Hook Winery

With this movie depiction’s of a tiny hero desperate to save her ill father and sinking home, we find parallels in the brave plight of Brooklyn’s Red Hook Winery, which was pummeled by Hurricane Sandy and has been fighting to recover ever since.

Amour: That Special Bottle You Haven’t Opened Yet

As the film reminds us how love can be tested and how beauty can fade before our eyes, we must apply these lessons to our own lives and open that special bottle now. You and I have already waited too long.

Recommended: Any special occasional bottle you have on hand.

AFWF: Given your “unpretentious over-delivery of pleasure” approach to at-home entertaining, what would be your key ingredient to an at-home Oscars soiree?

My English friends Sarah and Marcus Oliver have mastered the art of the Oscar party, and one secret of their success is that they ask people to dress up. Having everyone gathered in red carpet garb creates ebullience in the room and adds to the vicarious pleasure of the evening.

To keep things from getting too formal, however, they offset all of the fancy dress with the most humble, toothsome treats that you’ve ever laid your lips to: crispy, glazed English mini-sausages. These links are so coveted by guests that the party’s invitation now carries the assurance: “Yes, there will be mini-sausages.” In a recent email exchange, I persuaded Sarah to reveal more about how she and Marcus prepare these luscious logs of love: 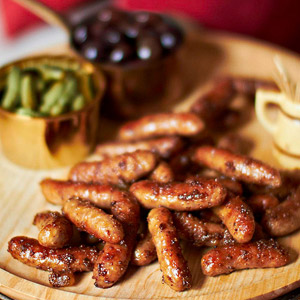 AFWF: Are you especially rooting for any contender (in any category) in particular?

For me, Zero Dark Thirty was unforgettably arresting, sending me into the night with surging adrenaline and in desperate need of a Blackhawk to board. I found Jessica Chastain’s portrayal of the relentlessly driven Maya particularly memorable. The moment Maya tells the CIA Director, “ I’m the motherf—– that found this place, sir,” Chastain won my vote for Best Actress.

AFWF: Lastly, what can Festival-goers expect to learn from your “Cinema Vino: Wines from the Movies” demo at the 2013 AFWF?

Like with all of my appearances, I aim to make this demo uncommonly illuminating and humorous – and, as an editor at Food & Wine magazine once described of my seminars,“like one big party.”