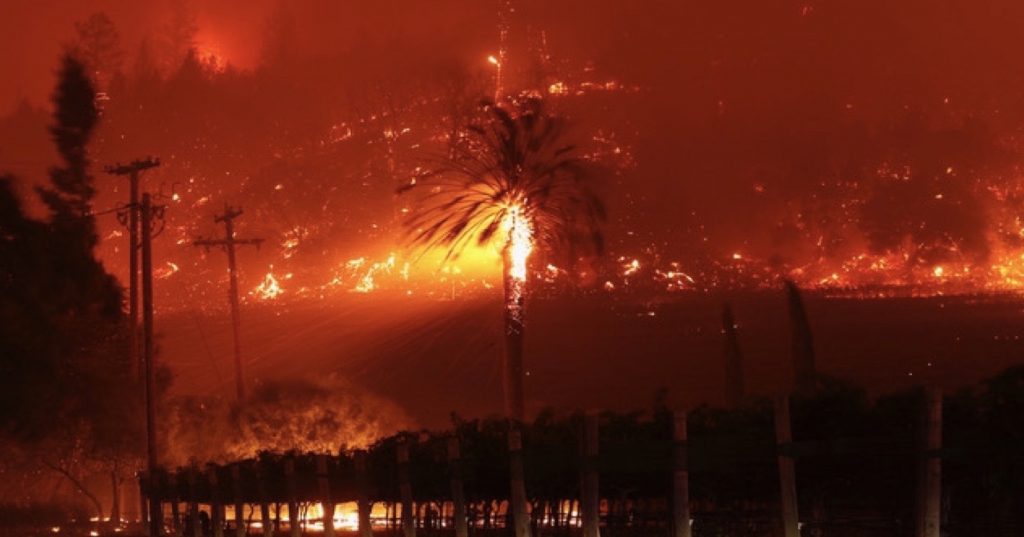 Fire on all sides: this is what Boeschen Vineyards winemaker and cofounder Doug Boeschen saw as flames threatened his Napa winery. Join me Thurs, Oct 22 7 pm ET/ 4pm PT for an interview and virtual tasting with Doug Boeschen about his winery’s remarkable escape from destruction and how he and his fellow winemakers are surviving the terrible fires. The event is FREE but seats are limited. Register here. (We will definitely be raising a glass to the brave first responders).

The only thing better than watching the most binge-worthy series is knowing which wine to pair with them. Thus we have the return of Wine & Prime, which was so successful last year that I have partnered again with the Amazon and the LA Times to bring you this unique wine tasting event.

Join me on April 25 as I pair the most binge-worthy Amazon Prime Video Series with the ideal wines.  The Wine & Prime event is at 7pm at the palatial, historical Hollywood Athletic Club. I clue you into what you need to know about each wine and why it is such a good match with each Amazon Video series. Find out the which wine is the perfect pairing with The Marvelous Mrs. Maisel, Homecoming, Good Omens, Hanna, Jack Ryan, The Romanoffs, and more.

After my Wine & Prime lesson, you will  have the opportunity to taste the wines I recommend while wandering through an astonishing assortment of interactive activations, each of which will take you deeper into an Amazon Original Series and provide insight into why it is so binge-worthy.

The Wine & Prime event is free and uniquely fun, but RSVP now as space is limited and first come first serve, for a one of a kind wine tasting & experience✨. To RSVP please visit this page. 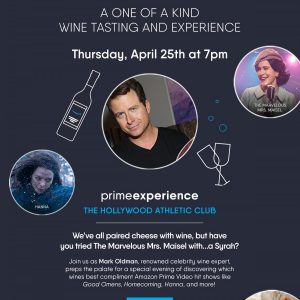 Cabernet Etiquette: “Don’t EVER say that in this situation!” sneered the Secret Service agent, his neck veins and eyes aflame just long enough to singe a look of terror into my puzzled face.

I was at a political fundraiser in the living room of a wine collector in the leafy suburb of Katona, New York. The host — a genial real estate czar with a craving for collectable Cabernets – had asked me to decant a selection of his vinous thoroughbreds and introduce them to the thirty or so supporters – designer Kenneth Cole among them — waiting to hear former President Clinton speak on behalf of Hillary.

As Bill made his way around the living room greeting donors, a guest who had seen me talk about the night’s wines asked me to pour her some of the ‘95 Lafite Rothchild. I informed her cheerfully that the host wanted the guests to enjoy the wine in a specific order, so by house rules, it was “illegal to pour the Lafitre Rotchshild before the Haut Brion”.

To our incredulity, that was all it took to trigger the venomous eruption — “Don’t EVER say that in this situation!” — from the Secret Service agent planted nearby.

In a flash, I wondered if his sudden imposition of a vinous speech code was compelled by his special knowledge of how first-growth Bordeaux from the 1995 vintage should be served: was this a secret sommelier hiding behind an ear piece and a Glock?

Or, in the heat of the moment, did his oversensitized, reflexes-at-the-ready mind process my utterance of “Haut Brion (Oh Bree-ohn)” as “opium”?

Whatever the case, this overzealous and ill-tempered power tripper – imagine a seething, monster-truck version of Bobby Flay – yanked the words “illegal” and “Haut Brion” out of their benign context and jumped all over them like they were an injured Gipper leaning on a limo.

No amount of misplaced malevolence from the Secret Service, however, could dampen the buzz in the room and in the decanters before me. Whether or not you are a Clinton (or Cabernet) supporter, you had to admire the former President’s personal magnetism and intellectual virtuosity.  And the wine was equally arresting, an all-star line-up from the 1995 vintage: a Napa legend, two first-growth red Bordeaux, and a fabled Super Tuscan:

Two things surprised me.   First, given its critical praise (Wine Spectator had called it “the best Lafite in ages”) and illustrious reputation, I expected the ’95 Lafite to be the top dog, but the ’95 Haut Brion ended up winning the day. While the Lafite showed the building blocks of greatness — blackberries, pencil lead, cigar box – it was edgy and not yet ready for prime-time, like a great soup before its components have melded together.

The Haut Brion, in contrast, was a wine in full – a wholly pleasurable paragon of elegance, medium-bodied with perfectly-integrated essences of blackcurrants and cedar and smoke and a lush, almost Burgundian silkiness. The next week I mentioned my impressions to Patrick Cappiello, a sommelier at New York’s Veritas restaurant, and he confirmed that among the Bordeaux first-growths, Haut Brion is often more approachable in its relative youth, 12 years being still young for these titans. “With more recent vintages, I never steer customers [interested in Bordeaux first-growths] to Lafite,” Cappiello told me. “Haut Brion is more likely to be pleasurable early on.”

The other surprise was, well, with such stunning wines available and his reputation as a man of considerable appetites, Bubba remained a teetotaler that night – sipping on nothing more than a glass of Diet Coke. Perhaps the Secret Service sommelier had rendered another Cabernet intervention.