TWITTER CONTEST: * Win a private Drink Bravely seminar with Mark Oldman for you and three guests (a $9,000 value!) 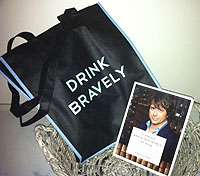 To celebrate the launch of Oldman’s Brave New World of Wine, every week in September we are running a contest on Twitter to see who can identify a particular wine (type and/or producer) recommended Mark’s new book. The hints will be based on a chapter, sidebar, or celebrity recommendation in the book.  Everyone who guesses correctly will be entered in our weekly drawing for an autographed book and a limited-edition, très-chic “Drink Bravely” tote bag .  Each week, there will be two winners of the book and bag combo.

Each person who guesses correctly by the end of that week’s drawing will automatically be entered into the Grand Prize drawing on October 11, 2010.

Grand Prize will be selected by random

How to enter:
Questions will be posted throughout the week during the contest period on Twitter. Tweet your answer to @MarkOldman with the Hashtag #DrinkBravely to enter.

Weekly winners will be notified via Twitter and will Tweet or email their shipping address to us that day.  On December 8th, 2010, a Grand Prize winner selected randomly from all weekly winners and announced on Twitter and the MarkOldman.com web site.

Grand Prize (One winner announced October 11, 2010) – $9,000 value
A private Drink Bravely seminar with Mark at a cozy, cool location in Manhattan, for you and three of your guests, including 90 minutes of instruction, 6 different wines (“Brave New Pours”), including one decades-old bottle from Mark’s personal stash, and 4 autographed books.
Weekly Prize (Two winners chosen each week through Oct 4, 2010):
(1) autographed copy of Oldman’s Brave New World of Wine and one (1) extremely-limited-edition “Drink Bravely” tote bag shipped First Class to an address in the United States – $30 value

No purchase necessary to win
Clues give each week may include quotes from the book “Oldman’s Brave New World of Wine” however the book is not required to identify the winning answer.

This contest is organized and executed by Wetakem, LLC (“Sponsor”).  Sponsor reserves the right to cancel or modify the promotion if fraud, misconduct or technical failures destroy the integrity of the program. If technical malfunctions or suspect voting/irregularities corrupt the voting process, Sponsor reserves the right, in its sole discretion, to award prizes based solely on the weekly winners’ responses or non-suspect votes.

Proof of submitting entries will not be deemed to be proof of receipt by Sponsor.

Any entries which are suspected of being fraudulent (including those using robotic, automatic, programmed or similar methods of participation) will be disqualified, based on determinations made solely by Sponsor.

Sponsor reserves the right to prohibit the participation/voting of an individual if fraud or tampering is suspected or if the account holder fails to comply with any requirement of participation as stated herein or with any provision in these Official Rules.

The Grand Prize winner is responsible for covering their own airfare and lodging and any other associated costs involved in travelling to and staying in New York City for the Drink Bravely grand prize.  The winner has until June 30, 2011 to arrange a mutually convenient date with Mark for the seminar.