Like Linus with his safety blanket, I always seem have a bottle of wine in tow. This can be problematic – as I learned this summer when flying out of Atlanta’s airport – when one forgets that TSA rules now prohibit thirsty trekkers from carrying aboard when flying, even one wine bottle – even if it is unopened and placed in the world’s largest Ziploc pouch. After TSA officers caught me with a bottle of Delamotte Brut Rosé Champagne NV after I inadvertently left it in my carry-on bag, I returned to the airport’s lobby and scrambled to find the most parched potential recipient. First, I offered it to a circle of Army infantrymen in uniform, figuring that no one needed a good swig more than they.
“We’re flying, too,” they informed me, almost in unison.
Roger that. I revised my mission to find someone who looked deserving and who wouldn’t need to pass through the security checkpoint that day. I found my mark by a burger joint, where a sweet-looking couple in their twenties was enjoying a leisurely lunch.
“Are you flying today?” I inquired.
They eyeballed me warily, probably searching for a Hare Krishna robe hiding beneath my sweater.
“No, we’re waiting to pick up friends.”
With Bob Barkerian ebullience, I extended the bottle their way and explained:
“Security won’t let me take this through the metal detector – and it’s too late to check my bag. Would you like it?” 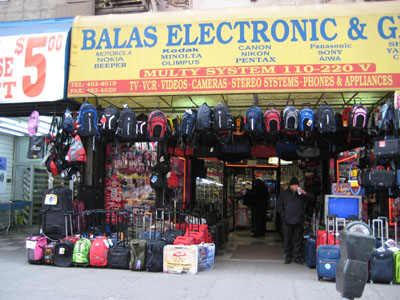 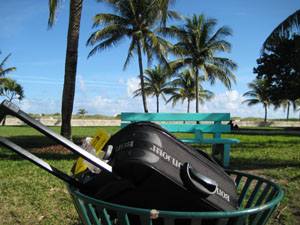 They still hesitated.  Who can blame them, with the airport intercom’s endless warnings about not accepting scary packages from strangers.

That did it.  Their hesitation melted into jubilation.  A businessman in pinstripes eating next to them – likely a wine connoisseur — shot me why-didn’t-you-pick-me look.  My bubbly baton, finally, was passed.

Then, a few weeks ago, before heading to one of those ultra-trendy, extortionist hotels in Miami’s South Beach for the week, I resolved to bring my own stash of wine in order to avoid paying bottle-service prices for a 7-11 wine.  (My penchant for traveling and flying with wine is well known to my friends and has also been documented in this New York Times piece).  But multiple bottles wouldn’t fit in my regular suitcase and packing them properly and Fed-Ex-ing them down to the hotel in time would cost hundreds of dollars.

The solution?  I headed down to Manhattan’s Fourteenth Street, a bleak, Bucharest-like boulevard known for dollar-stores, pawn shops, electronics in various states of inoperability, and really cheap luggage.

“What is your least expensive but sturdiest roller bag?” I asked the clammy Cosmo Kramer-type hovering near the bags at Balas Electronics and Gifts.

He pointed me to a perfectly-fine-looking stewardess-style bag with “Bonjour” emblazoned its strap.  Now this was a find: only $20 and linguistically faithful to wine’s spiritual homeland!  But when I gave it a test roll, it wobbled like soused sailor.

“Ah, let me get you a fresh one,” Kramer said, as if I were purchasing a juicy but bruised piece of fruit.  He rummaged around in a back room and produced a bag with a slightly better gait – wheels sturdy enough for a toddler’s toy or, just possibly, a one-time rumble with Continental Airlines baggage handlers.

Back at my place, I wrapped seven wine bottles in t-shirts and Fred Perry track pants and stuffed all of it into the bag, creating a de facto hamper-cum-wine locker.  To my amazement, the bag survived the trip to the airport, and most surprisingly, emerged in one piece – though extra wobbly — at the baggage claim in Miami.

In my hotel room, I unzipped the bag, expecting an abbreviated version of that scene in The Shining when the sea of blood comes rushing out of the elevators.  Instead, the bottles were dry and happy, ready to slake the thirst of anyone with a corkscrew.

The experiment a success, I guided the teetering bag downstairs to Ocean Boulevard and thought about how a bag purchased in one of the world’s dreariest locations would now be discarded in a movie-set scene of paradise – well, if your idea of paradise involves pink flamingos and the synthesizers of Jan Hammer.  Placing it atop a public garbage can — amid azure skies, majestic palms, and a silly Day-Glo bench — I gave it a respectful salute.  Au revoir Bonjour booze bag! 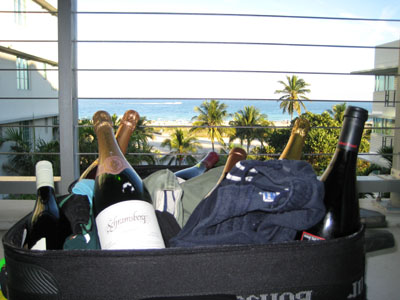