The Guac Atop Ixtapa

The recent Food & Wine Festival in Ixtapa-Zihuatanejo was a technicolor caravan of spirited gastronomy.  You can read all about it, including the much-loved appearances by my fellow speakers Michael Symon and Marcus Samuelsson, in this excellent recap at Eater National.  While the setting was Monaco-travel-poster beautiful, I couldn’t exactly pass the time slurping guava in a hammock on the beach.  When I wasn’t teaching one of my four seminars, I mostly was preparing for them.  Successful presentations, like good writing, require dogged, sweaty effort.  There’s just no way around it, no short cut when you want your audience to feel like they’ve gotten their money’s worth. This still doesn’t justify why I didn’t take the time to enjoy the infinity pool conveniently located in my hotel suite’s outdoor living room.  You read that right: pool-in-living-room.  I was stationed at La Casa Que Canta, a hotel so dreamy that it figured into the Meg Ryan flick When a Man Loves a Woman.  Being by myself in this secluded cradle of romance, I was essentially on a honeymoon of one.  Twisted minds might wonder: well, then, did you at least get lucky with yourself?  I ain’t saying.  But I can tell you that I relished the hotel’s superb room service, which brought the resplendent hillock of guacamole you see in this glamour shot. 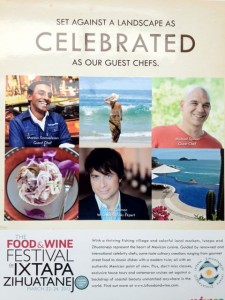 Our driver for the weekend, Ricoberto Perez, was one of my favorite memories.  A sweet, unassuming man, he was quite knowledgeable about the area, tempting us with stories of a local “tamale lady” who sold her magnificent cornmeal creations at certain hours of the night.  Rico was also a bit drowsy, partial to catnaps in his van’s back seat when he wasn’t driving us.  When someone in our group asked him about his hobbies, his answer was matter-of-fact: “I like to exercise.  You know, stay in shape.”  Only later in the trip did he casually mention that he was participating in the next day’s Ixtapa Triathlon Pan American Cup, the kind of competition that I thought was solely the province of Oakley-wearing ectomorphs.  Our group was floored.  Calling his bluff, I demanded, playfully, to see his official gear.  He produced his wetsuit, complete with its sponsorship patches from local eateries. The surprise we experienced reminded me of the scene in Romancing the Stone when a local tells Michael Douglas and Kathleen Turner that his only vehicle to escape town is a “lil’ mule”.  “Lil’ Mule,’ you might remember, turns out to be the nickname for his roaring, jacked-up Ford Bronco.  Looks can be deceiving. Another highlight was getting to know Mexican wine, a rara avis that is almost never seen on American shelves.  A lot of it is very good, but unlike Argentina’s Malbec or New Zealand’s Sauvignon Blanc, Mexico has yet to find a signature grape.  Instead, the country’s increasingly sophisticated winemakers use a broad array of grape types, including a preponderance of Spanish and French varieties, almost all of which are grown in ocean-cooled microclimates of the northern Baja peninsula.  If you’re interested in sampling some Mexican wine, good examples can be ordered through the Baja Wines website.  If you do, no one can ever accuse you of failing to drink bravely. One of my favorite wines was Vino de Piedra, a red that Food & Wine’s Jay Meyer ordered as our group gathered to have a nightcap on the Viceroy Zihuatanejo’s beautiful beachfront.  The waiter decanted the wine right there – on the beach, at midnight, into a fantastically long-necked decanter – creating what deserves to become a new trend among oenophiles: nighttime beach decanting.

After finishing my fourth and final seminar, I returned to my hotel and celebrated with a massage, which commenced in a way that was anything but relaxing.  Before the masseuse exited the room, she pointed me to a surgical-blue shower cap sitting on the massage table. They must use some strong oils here if you have to keep your head covered, I reasoned, while attempting to stretch the fabric over my head — that is, until I noticed it had two holes in it. That can’t be a shower cap, I finally realized; it has holes for your legs.  I imagined that it must be some sort of protective diaper required by the Mexican massage authorities. The question remains: who in this equation is being protected? I tried to pull it on and was to alarmed to see that there was way too little fabric in front, and way too much in back – not, unfortunately, for anatomical reasons but because I had it on backwards.  As I struggled to turn it around, my get-undressed time must have expired because the masseuse started knocking.  With the language barrier, she didn’t know to recoil from my panicked “no’s!”.  It wasn’t exactly one of my finer moments as she got an eyeful of me, a pasty blur hopping on one foot with this blasted shower cap twisted around a leg.

On to less humiliating subjects, Inside Food & Beverage has just issued this generous review of Oldman’s Brave New World of Wine.  Don’t forget: the book makes for an excellent gift for Mother’s Day, Father’s Day, or, er, Bastille Day, and can be ordered at Amazon for the price of a (good) tequila shot. Last week it was electric, as always, hanging out with the lovely and talented chef-extraordinaire Elizabeth Karmel (a.k.a. “Grill Girl“) on Martha Stewart Living Radio. We talked about wine for Easter, including the joys of rosé and Albarino. I also mentioned to her that after watching Stanford Basketball recent triumph in the National Invitation Tournament (NIT) at Madison Square Garden, her Hill Country BBQ was the perfect choice for a celebratory barbecue feast with friends.