Red Obsession review: Why All Winemakers Need an “8” on Their Labels 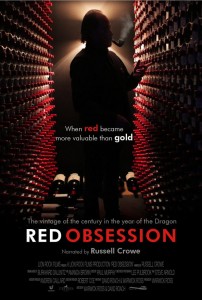 The moment in the captivating new movie Red Obsession when Chinese wine enthusiasts sprint to a tasting like oligarchs storming the entrance of Art Basel Miami or Gaga fans hurdling into a concert hall, you know you are witnessing a particular degree of infatuation.  Opening last week in in New York, this Russell-Crowe-narrated documentary transports the viewer inside the patrician world of Bordeaux wine and among the money-is-no-object Chinese collectors who have now supplanted their American counterparts as the leading importers of investment-grade Bordeaux.

The movie packs deep flavor into its 78 minutes, encompassing lush aerial sweeps of Bordeaux vineyards, candid commentary by wine pros such as the UK’s Oz Clarke and China’s Jeannie Cho Lee, and a front-row seat to the Chinese frenzy for prestige wine as both a tool for investment and a symbol of their newly-won wealth.

The movie also reveals a certain Bordelais ambivalence towards their voracious patrons in the East, some of whom are snapping up vinous treasures for pure speculative purposes, with no intention of ever wetting their lips.  China’s most coveted Bordeaux premier cru, Château Lafite Rothschild, however, evinces no hesitation; aware that “8” is a lucky number in Chinese culture, the estate shrewdly embossed the symbol for 8 on each bottle of ‘08 Lafite.  The price of that wine shot up almost 20% days after the labeling was announced.

The film also shows us the darker sides of this consumptive ardor, particularly the market bubble that has already begun to deflate and the growing scourge of counterfeiting.  And we learn that the Chinese aren’t content to merely buy; they are fiercely interested in cultivating their own vines and beat the French at the own game, converting vast stretches of their homeland with the aim of eventually becoming planet’s largest producer of fine wine. Indeed, visiting Shanghai a few months ago, I tasted a fruit of these new efforts and documented it in this video.

Red Obsession is the rare grape flick with broad appeal, a fast-paced swirl of the economic and social implications that attend China’s explosive demand for fine wine.  Ultimately it is about passion: the devotion that Bordeaux vintners have for their storied terroir and their determination to exploit the demand for it wherever they can, as well as the compulsion felt by China’s new rich to embrace symbols of Western success.

In one of the film’s funniest moments, we see how fervor for wine can take over for more carnal inclinations.  Explains Peter Tseng, sex-toy billionaire and irrepressible wine collector: “When I was younger, I preferred sex.  Now I prefer wine.”

“Red Obsession is currently in limited release in select American cities; check your local listings.  You can also download it now via iTunes and Amazon.