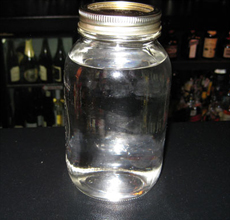 Moonshine: In New Orleans for Thanksgiving, I made sure to drink American. No, not Zinfandel, the uniquely American red, rich with ripe fruit and black pepper, that flatters the diverse tastes of the Thanksgiving table.

Instead, my patriotic pour was none other than the infamous, unlicensed libation known as moonshine, which, until then, I thought was solely the stuff of hillbilly hellmaking.  To my delight, however, home-brewed spirits – dubbed “moonshine,” and also “skull cracker,” “ruckus juice,” and the “sweet spirits of cats a-fighting” – are waiting to be discovered in some of the Big Easy’s best eateries.  It happens to be on the dessert wine list at Cochon, a spectacular sanctum of Southern swine cookery.  At dinner, we started with wood-roasted oysters and then literally pigged out on pork ribs, fried boudin with pickled peppers, roasted pork shoulder, creamy grits, cucumbers in vinegar, and smothered greens – all washed down with bottles of cleansingly crisp Commanderie de Peyrassol Rosé 2007.

It was then time to shine, so to speak, with two commercially-available moonshines: Virginia Lightning Corn Whiskey and Catdaddy Carolina Moonshine.  The first was clear to the eye and lethal to the larynx, a tribute to the grab-anything-in-the-parents’-liquor-cabinet mistakes of my teens, a liquid “mule kick” if ever there was one.  The Catdaddy, however was a different animal altogether, with a rounder, sweeter side, and flavors of nutmeg and butterscotch taming its bourbon-y bite.  I liked it so much that I picked up two bottles the next day at Martin Wine Cellar on Magazine Street.
I was still on my moonshine high when we went to dinner the next night at Herbsaint, which is Cochon’s more upscale sister eatery, both owned by James Beard-winning chef Donald Link.  While feasting on a lushly-textured Kurabuta pork belly and a bright-but-earthy red Burgundy, I asked general manager and wine buyer Joe Briand if Herbsaint was also in possession of moonshine.  He smiled knowingly and invited us to roll up to bar before we left.  We did, and there he retrieved two Mason jars sitting discreetly behind the bar.  They turned out to be the realest of real deals: home-brewed hooch, illicitly distilled and smuggled to New Orleans in someone’s truck; that someone apparently gets around the law by not selling it to the restaurant outright but by bartering it for the occasional dinner.  The production and sale of such private-label (or, this case, no-label) hooch is illegal (though rarely prosecuted by the authorities today) due in part to backwoods distillers’ dangerously primitive practices, such as using a car radiator as a condenser and a campfire as a heat source.  These methods have been known to imperil the distiller or poison the drinker.
But because it was acquired by one of New Orleans’ top restaurants, the moonshine before us seemed more like it would be an artisanal creation – not unlike unpasteurized gourmet cheese or high-end homemade wine – that was more Great Gatsby than Uncle Jessie.  Even so, when I tasted the clear liquid of the first jar, I could have sworn I heard the banjo picking of the Dukes of Hazzard theme – as my motor skills were beginning their own hazardous journey.
“This one is not about flavor, it’s about proof,” Briand explained. “It’s simply a means to an end.”  Indeed, this was ruckus juice at full squeeze, better suited to battlefield anesthetization than it was to postprandial relaxation.  The second moonshine, however, struck a better balance.  Carmel-colored from oak aging, its high-proof potency was tempered by a smooth, cider-like flavor, not unlike a nice glass of Calvados, the apple brandy from Normandy, France.
What better way to celebrate Thanksgiving than with a mysterious tonic in a city that is like moonshine itself: clandestine, dangerous, marginally legal, and an XXX barrel of fun.