Bulbous, blingy, and briskly refreshing, Kamotsura Gold saké is a splendid introduction to saké and makes for a singularly exotic gift. 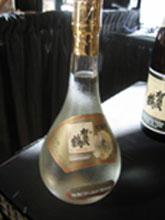 While slurping my way through The Joy of Saké, a grand tasting of over 200 sakés (with nary a spit bucket in sight), I came upon a bottle of fasicincating form.  Its shape reminded me of a tear drop, or, if you will, a kind of Oriental Orangina, albeit a bit slimmer and, of course, devoid of any citrus sensation.

Intrigued, I took a sip, and was immediately charmed by its faint melony nose and dry, impeccably clean taste.  I was heartened to later discover that this libation, the Kamotsura Tokusei Gold saké, was just $14 a bottle and also a Gold Award Winner at the 2005 U.S. National Saké Appraisal.

1) Saké is rice wine, an alcoholic drink brewed from rice and water.  Higher quality saké comes from rice kernels that have been “polished” or milled the most, so as to shave off the kernel’s less desirable outer part and get at the its starchy core, which is the good stuff that gets fermented.

2) Kamotsura Gold saké is one of Japan’s original Daiginjo (Die-gheen-joe) sakés, the highest category of sake in which rice kernels receive the most polishing before fermentation.

3) Premium saké is often served chilled, but not ice cold.  Low-end sake – such as the swill on tap at your local Benihana — is served hot to mask its less-than-ideal flavor. 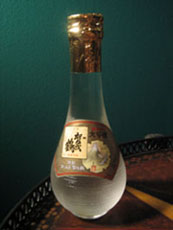 An excursion in purity, Kamotsura Gold has a subtle honeydew scent and tastes as clean as an alpine stream, its finish long, pleasant, and relatively intoxicating (16.4% alcohol vs. regular wine’s typical 11%-14%).

All of this, coupled with its gentle $12-$14 price, makes Kamotsura Gold a splendid gift for a casual soiree.  Even if you’re not a saké conoisseur, toting this mysterious potion to your next dinner party will make everyone else regret that they brought yet another yawn-worthy bottle of Pinot Grigio.

After searching without success for more bottles, I ended up cornering Kamotsura’s vice president, Akira Ihara, at a Japanese goods conference and discovered (through an interpreter) that Kamotsura Gold is imported to the U.S. by the Mutual Trading Co. (www.lamtc.com).  Through Mutual Trading, I learned that it is sold at New York’s Union Square Wines (212 675-8100) and Landmark Wines (212 242-2323).

According to Mutual Trading, it is also stocked at these locations in the the San Francisco Bay Area:

Unfortunately, the bold and beautiful 720 ml size of Kamotsura Gold is not yet imported to the U.S.  Resourceful drinkers, however, might be able to order it direct from Japanese department stores such as Mitsukoshi and Takashimaya.