The Art Basel banana became a worldwide phenomenon, but when I came across it in the very first hour of Art Basel Miami last December, it merely seemed like one of the many absurd displays you would find at America’s leading art festival.

I did what any slave to social media would do: I posted to Instagram a photo of myself with the bound-up banana. With open palm, I Vanna-Whited my arm in its direction.

Before leaving the banana’s booth, I asked the gallerist if he thought that anyone would actually purchase the work, officially titled “Comedian” by Italian artist and serial provocateur Maurizio Cattelan. The gallerist informed me that that the first edition of it had already sold for the startling sum of $120,000.
Despite this surprise, I thought little more about the banana until early that evening, when an art world friend excitedly sent me a text asking if I had just purchased an extremely costly banana.
“No, why do you ask?,” I texted back.
“Because Artnet just ran a story on the banana and you’re standing with it,” she explained. Apparently this venerable art publication had come across my Instagram photo and featured it in one of the first stories about the extortionately priced fruit.
At a party later that night I happened to meet Emmanuel Perrotin, the owner of the Parisian gallery displaying the banana. When a mutual friend informed him that I was the fellow from the Artnet story, he hugged me with the zeal of a rescued castaway. He was relieved to have made a sale already, because, like Warhol suggested, only then did the banana truly become a work of art.

In the ensuing days, things went fully bananas. My photographic moment appeared around the world, from a newspaper in Munich to a blog in the Middle East. It found its way to New York magazine, on the Today Show, and on The Daily Show with Trevor Noah. A young French woman at a Miami Beach grocery store stopped me to ask, “But, eh, you are dee banana guy, no?”

Back at the fair, few cared that a hoodie-clad Leonardo DiCaprio was browsing a brightly hued Picasso. Instead, all eyes were peeled on the banana. Queues formed as attendees wanted their own social media moment, and these grew longer after a performance artist ate the banana.
Eventually the display was closed down due to so-called “dangerous crowd movements” and later a fairgoer sprayed graffiti on the then empty wall — both edging the artwork closer into the realm of full-out cultural zeitgeist. When celebrities and multinational corporations started posting their own parodies of the banana, you knew the story had achieved full escape velocity.
What accounts for the banana’s extreme virality? Some of it was simply the banality of a banana and duct tape, juxtaposed with its eye-popping price tag. This alone was enough to generate surprise in every corner of the world.
Let’s not overlook the banana’s sexual suggestiveness, either. This potassium-rich crescent is one of the better endowed of the tropical fruits. 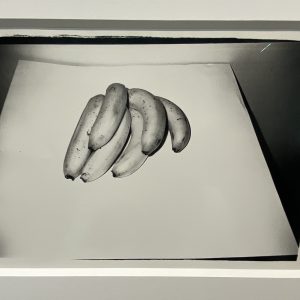 Finally, obeying artist David Hockney’s definition of art as something “that has to move you,” the banana undeniably pushed buttons. The comments on my social media feeds boiled over with everything from bewilderment to delight to horror to exasperation. Some wrote off the banana as the final nail in the coffin of contemporary art, while others crowned it the Warholian soup can of our time.
Perhaps this is where the true art resides: not in the Art Basel banana itself, or even in the idea of it, but in our impassioned reactions to it. Our collective emotions constitute a kind of performance art that transcends the actual artwork. Few other things in our polarized, attention-deficient world could get so many different people engaged in an intellectual debate on the meaning of art.
At the same time, in these frothy but volatile economic times, the banana might come to be the quintessential symbol of reckless excess. When the next recession finally rumbles in, some people will point to the banana as the surest sign that Rome was burning.
Until that happens, however, we can marvel at the societal forces unleashed by a mere piece of fruit and swath of tape. Up above, Warhol must be smirking in his fright wig, for it was he who once observed: “Art is what you can get away with.”