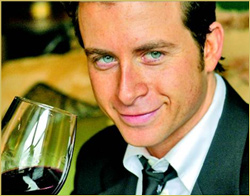 The pleasant fellow seated next to me at a lunch for the wine press in November told me that he had co-founded a Web-based career information site. Ah yes, I thought, here’s an outsider who wangled himself an invitation to an insider’s event. Probably trying to learn a thing or two about the wide world of wine.

Just then, our host, Franck Duboeuf of the mighty Beaujolais firm, rose to announce the winner of the competition for the Georges Duboeuf “Wine Book of the Year.”

“Mark Oldman, please come forward to accept the award for your wonderful book, ’Oldman’s Guide to Outsmarting Wine,’” Mr. Duboeuf said. Suddenly, the seat next to me was vacated. Never mind the wine; it was I who had been outsmarted by this presumed “outsider.”

Had I not sat next to Mr. Oldman, who is 36, I might never have opened his book. So many wine primers feel like they issue from a pedestal or pulpit. How refreshing, then, to find an authority who asks the reader to “Consider me your wine sherpa, helping you navigate the perilous but rewarding elevations of vinous knowledge” in his guide (Penguin Books, $18).

Mr. Oldman, a native of Bernardsville, N.J., is determined to steer clear of pompous wine-speak, although you may occasionally need a grasp of pop culture to catch his drift. Comparing Chardonnay to Sancerre, for example, Mr. Oldman writes that if the former “evokes the first few dreamy notes of the Beach Boys’ ’California Girls,’” the latter “channels the menacing synthesized drone prefacing Gary Numan’s ’Cars’ … you’ll like how it mixes a lash of pain with its pleasure.” Sometimes, Mr. Oldman is merely disarming, as when he begins a chapter on sparkling wines: “Being asked to distinguish between different bottles of bubbly is like differentiating a crocodile from an alligator. There must be a difference, but who knows what it is?” Be assured that Mr. Oldman does, and so will you.

Behind its quirky style, a bedrock utilitarianism grounds this guide. Prefacing his “Eleven Pleasure Principles of Food and Wine Pairing,” for example, Mr. Oldman pooh-poohs the notion of “some grand template of correct matches that, if transgressed, will forever brand us as gastronomic barbarians.”

His principles, on the other hand, guide us toward clarity, as in: “Crisp wine loves acidity but detests sweetness.” “Proteins and fats tame tannic wine.” “Off-dry wine subdues spicy food.” Most surprising to me is a principle called “Pepper’s Positive Punch.” I think Mr. Oldman is on to something in counseling that “a sprinkling of ground pepper will sensitize your taste buds and make many wines taste richer and more flavorful.” I reject out of hand, however, his suggestion that “food and wine pairing is like sex or pizza: even when it is bad, it can be pretty good.” Sir, that just ain’t so.

I’m more in tune with Mr. Oldman’s assertion, in discussing one of the wine world’s most controversial subjects, that decanting wine “is a bit like taking vitamins: some swear by it, others do it on special occasions, and a third group deems it a waste of time.” And he goes on to identify three occasions on which decanting is useful.

He’s also clear-eyed about dealing with leftover wines, which he compares to having a dinner guest sleep over. One night is okay, “but for most of us, there’s only so long you can share your dental floss or aerate the Aerobed.” Paradoxically, that “$6.99 Chardonnay” may hang in longer than a pricey wine because “the less complexity a wine has at the start, the less there is for time to steal.”

Last Wednesday, I called Mr. Oldman to ask him how he’d found wiggle room in his corporate career to write a wine guide. Speaking poolside at an Arizona resort, where he was on vacation, he explained that it all started in the late 1980s when he spent a year abroad at Oxford while a Stanford undergraduate. “The students have an Oxford Wine Circle which actually trains for competitive blind tastings,” he said. “They had an affiliated group which allowed me to attend some events. Back at Stanford, I thought, ’Wouldn’t it be great to start a wine club?’ So I did, and there was a strong response. We thought we’d have to pay for the wine, but it turned out California winemakers were champing at the bit to introduce their wines to the next generation of drinkers and only too happy to supply the wine.” Mr. Oldman, meanwhile, discovered he had a knack for bringing students into the wine fold.

In the summer 1992, Mr. Oldman, then 23, persuaded Tony Goldman, owner of the now defunct Soho Kitchen & Bar, to let him teach a wine seminar in an unused cabaret space. “I told Tony that I’d organize and market the course if he’d supply the wine.” Mr. Oldman’s sister and friends helped him hand out flyers for that first New York course.

“People expected this old snob to be the teacher, but here was this young gun,” Mr. Oldman said. “I tried to use the California mindset: being inclusive, distilling out what students really needed to know, not saddling them with history.” Special attention was paid to how wine smells. “Rather than saying that this wine has a tar component in its smell, I’d bring in some shoe polish to separate out that smell. If a wine had tealike aromas, I’d simulate them with canned asparagus. I’d have 15 of these little crack like aroma vials at every class.”

Mr. Oldman received his bachelor’s, master’s, and law degrees from Stanford. In 1997, he and two partners founded the Vault (www.vault.com), the online career information provider. While building the firm as co-president, Mr. Oldman continued to teach wine courses, mainly in restaurant settings. Pitching his wine book to publishers three years ago, he took his wine seminar to their offices. “I’d bring the glasses and the wine,” he said. Penguin Books bought the book after Mr. Oldman conducted separate seminars for the editors and marketing staff.

Mr. Oldman lives in a West Side apartment where he keeps his best wines – mainly Burgundies – in a small wine refrigerated wine storage unit in his bedroom. “My wine and I sleep together,” he says.

“My basic attitude,” Mr. Oldman says, “is that if people take a chance on me, I’m going to make it worth their while. Wine can seem so abstract, so ecclesiastical. People need an on-ramp into this world, not theology, and that’s what I focus on giving them.”

"A wonderful book for those eager to escape their Pinot Grigio-Chardonnay-Cabernet Sauvignon-Merlot wine rut. The book speaks to readers with different levels of wine experience and knowledge. It’s just my kind of summer reading. (Of course, it’s de rigueur in fall, winter and spring too.)"